Pineville Gun Shop is part of The Range family of companies. 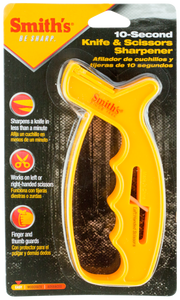 Or, apply for financing now!

Purchase with monthly payments through

Based on reasonable monthly rates

This product does not qualify for financing on it's own as it doesn't meet the minimum amount requirement of $300.00. However, if you add it to your cart, you may still qualify with the addition of other items.

Smith's 10-Second Knife & Scissors Sharpener features a "V" shaped knife sharpening slot with two crossed carbide blades. The carbide blades allow you to put a quick edge on your knife, are preset at a fixed sharpening angle, and are also reversible and replaceable.The patented scissors sharpener included in the handle of the 10-Second Knife and Scissors Sharpener features a specially designed floating round ceramic rod, which conforms to the exact angle of your scissors every time. It works on both left & right-handed scissors.